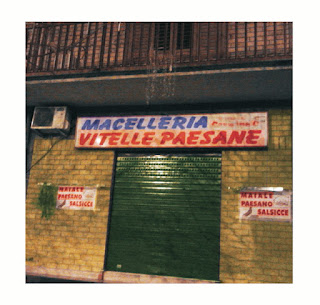 In italian "May Solo" sounds like never alone.
Why this title for a solo cd? How to detourner the solo idea
connected to the concept of author? That's the result: a
butcher shop and a lot of friends…
Something coming from the radical improvisation attitude
turned in a process of socializing practices and consecutive
transformation…
Feedback and resonance are the process played to overcome the
relation with the musical instrument, and coming-back to the
tools and objects, no difference between relations, practices,
esthetics and sounds.

Born in Salerno in 1981, where he began playing saxophone in the south italy


traditional brass bands.
He lives in Naples since 2000, where he graduated in Environmental Sciences.
During the 2002 he founded A Spirale with M.Argenziano and M.Spezzaferro ex
Missselfdestrrruction ("Asimmetrica" - Snowdonia 2000) avant-punk band born in
1998, actually they mixed a timbrical research to a post-punk attitude; together they
founded the label Viande Records.
During 2009 with SEC_ from Weltraum, other seminal napoletan experimental
band, he founded the duo Aspec(t).
As active musician he join a lot of different south italy formations involved
differently in radical-impro music as Strongly Imploded, Sarkazein, Razoj, Akhiano.
His solo collaboration releases are two, a duo, called "Up-Set", with Agostino Di Scipio
and with Arnaud Riviere; with both of them in different way he is focalized on fragile/
unstable system using feedback and resonance by recycled or self-made instrument and
sax. Actively collaborates in organizing Altera!, a small independent festival of
improvised-noise-experimental music and critical thinking between Naples, Salerno
and Avellino.

"I thought to proceed in the selection of this playlist working toward systems and constellations of relations
and affection.
Obviously, not relationship or parentage, but just an attempt at mapping during the continuous geopolitical
loss of bearings.
We’re talking about escape, friction, and collision, “feelings conquered because they’re sons of no one” and
not things bought, moved by the possibility of liberation from the spectacular mercantile economy that as of
now organize even the small niches /bitches that are the products of underground cultural consumption for
the bourgeois bohemian mish mash middle European youth.
We have shared techniques, ideas, discussions, spaces for concerts, houses, full tables and empty tables,
bottles, bars, shitty pubs, streets, books, listening and writing…
And above the author aesthetic as a revelation of a practice that passes through improvisation to break the
walls, the separation of languages, the genre, the consumption of music as a product tied only to the
enjoyment of a form or a narration or a composition, all around a world that moves as a result of everyday
battles and movements of liberation.
A discussion around the practice and the means/tools, years of forgotten history of radical improvisation
only to restart this mood in new fragile fields, where grindcore/hardcore/punk, hip hop, technorave, funky,
rock ‘n ‘roll, blues, fall apart and give space to the lived and human movements more than to the genres and
authors.
Again against the new post–museum logic, to the artist collectives and their re-qualification of abandoned
areas, against every form of mediation between the individual experience and the outside world."
[Written by Mario as introduction of a musical selection for the webzine A Closer Listen]